Spectro-Photometer for the History of the Universe, Epoch of Reionization, and Ices Explorer (SPHEREx) 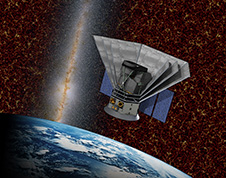 SPHEREx, led by Dr. James Bock of the California Institute of Technology and the Jet Propulsion Laboratory will: probe the origin and destiny of the Universe thru mapping the large-scale 3D distribution of galaxies to study the inflationary birth of the Universe; explore whether planets around other stars could harbor life by surveying water and organic molecules in interstellar ices through the early stages of star and planet formation; and explore the origin and evolution of galaxies by tracing the total light emitted over cosmic time from the first stars to modern galaxies.
+ Learn more about the SPHEREx Mission

The Earth is constantly bombarded with a stream of accelerated particles arriving not only from the Sun, but also from interstellar and galactic sources. The study of these energetic particles will contribute to our understanding of the formation and evolution of the solar system as well as the astrophysical processes involved. The Advanced Composition Explorer (ACE) spacecraft carries six high-resolution sensors and three monitoring instruments that sample low-energy particles of solar origin and high-energy galactic particles with a collecting power 10 to 1000 times greater than past or planned experiments. From a vantage point approximately 1/100 of the distance from the Earth to the Sun, ACE performs measurements over a wide range of energy and nuclear mass, under all solar wind flow conditions and during both large and small particle events including solar flares.

ACE provides near-real-time solar wind information over short time periods. When reporting space weather, ACE can provide an advance warning (about one hour) of geomagnetic storms that can overload power grids, disrupt communications on Earth, and present a hazard to astronauts.
+ Learn more about the ACE Mission

The Ionospheric Connection Explorer (ICON) will explore the boundary between Earth and space, to understand the physical connection between our world and the immediate space environment around us.

This boundary region is where ionized plasma (the ionosphere) and neutral gas (our atmosphere) collide and react, causing dramatic variability that affects space-based technological systems like GPS. The ionosphere has long been known to respond to “space weather” drivers from the sun, but NASA missions, such as TIMED and IMAGE, have surprised us in showing this variability often occurs in concert with weather on our planet. ICON will compare the impacts of these two drivers as they exert change on the space environment that surrounds us.

ICON's science objectives are to understand: the sources of strong ionospheric variability; the transfer of energy and momentum from our atmosphere into space; and how solar wind and magnetospheric effects modify the internally-driven atmosphere-space system.
+ Learn more about the ICON Mission

Swift is a first-of-its-kind multi-wavelength observatory dedicated to the study of gamma-ray burst (GRB) science. Its three instruments work together to observe GRBs and afterglows in the gamma-ray, X-ray, ultraviolet, and optical wavebands. The main mission objectives for Swift are to:

Launched in 2004, Swift was expected to observe more than 200 bursts during its nominal 2-year mission. In nearly six years of operation, it has detected more than 600 bursts with 90% of them triggered on board. Swift’s Burst Alert Telescope detects and acquires high-precision locations for gamma ray bursts and then relay a 1-4 arc-minute position estimate to the ground within 15 seconds. After the initial burst detection, the spacecraft “swiftly” (approximately 20 to 75 seconds) and autonomously re-points itself to bring the burst location within the field of view of the sensitive narrow-field X-ray and UV/optical telescopes to observe afterglow. Swift can provide redshifts for the bursts and multi-wavelength light-curves for the duration of the afterglow. Swift measurements are of great interest to the astronomical community and all data products are available to the public via the internet as soon as they are processed. The Swift mission represents the most comprehensive study of GRB afterglow to date.

Swift is part of NASA’s medium explorer (MIDEX) program and was launched into a low-Earth orbit on a Delta 7320 rocket. Swift is three times more sensitive than the BATSE detector aboard the Compton Gamma-Ray Observatory, which was the second Great Observatory acquiring data between 1991-2000. The hardware was developed by an international team from the United States, the United Kingdom, and Italy, with additional scientific involvement in France, Japan, Germany, Denmark, Spain, and South Africa.
+ Learn more about the Swift Mission 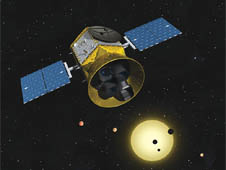 The Transiting Exoplanet Survey Satellite (TESS) will use an array of telescopes to perform an all-sky survey to discover transiting exoplanets ranging from Earth-sized to gas giants, in orbit around the nearest and brightest stars in the sky. Its goal is to identify terrestrial planets in the habitable zones of nearby stars. Its principal investigator is George Ricker of the Massachusetts Institute of Technology in Cambridge.
+ Learn more about the TESS Mission

Time History of Events and Macroscale Interactions during Substorms (THEMIS)

THEMIS answers longstanding fundamental questions concerning the nature of the substorm instabilities that abruptly and explosively release solar wind energy stored within the Earth’s magnetotail. The primary objectives of the mission are to

THEMIS accomplishes these tasks by employing 5 identically-instrumented spacecraft in carefully chosen orbits whose apogees line up once every 4 days over a dedicated array of ground observatories located in Canada and the northern United States.

Three inner probes ~10 Earth radii (RE) from Earth monitor current disruption onset, while two outer probes at 20 and 30RE remotely monitor plasma acceleration due to lobe flux dissipation. Magnetic field lines map phenomena occurring at the inner spacecraft to the ground arrays, where they can be observed as nightside auroral displays and geomagnetic perturbations.

The array of spacecraft and ground observations will enable researchers to pinpoint when and where substorms begin, thereby distinguishing between models that begin with current disruption in the near-Earth magnetotail and those that begin with magnetic reconnection in the distant magnetotail. The same array of spacecraft and ground observatories permits researchers to link phenomena observed in the magnetotail to those observed in the ionosphere.

The Far Ultraviolet Spectroscopic Explorer FUSE was a NASA supported mission that launched June 24, 1999 and observed the universe using high resolution far-ultraviolet spectroscopy, a region of the electromagnetic spectrum that is blocked by Earth’s atmosphere.

After a highly successful eight year observational period, on-orbit activities concluded in mid-October 2007 with the decommissioning of the satellite. FUSE provided a wealth of data that will be studied for years to come.
+ Learn more about the FUSE Mission

IMAGE studied the global response of the magnetosphere to changes in the solar wind. Major changes occur to the configuration of the magnetosphere as a result of changes in and on the Sun, which in turn change the solar wind. IMAGE used neutral atom, ultraviolet, and radio imaging techniques to detect and gather data on these changes.
+ Learn more about the IMAGE Mission

IMP-8 was instrumented for interplanetary, magnetotail, and magnetospheric boundary studies of cosmic rays, energetic solar particles, plasma, and electric and magnetic fields. The objectives of the mission were to provide solar wind parameters as input for magnetospheric studies and as a 1-AU baseline for deep space studies, and to continue solar cycle variation studies with a single set of well-calibrated and understood instruments.
+ Learn more about the IMP-8 Mission

The Rossi X-ray Timing Explorer (RXTE) was a satellite that observes the fast-moving, high-energy worlds of black holes, neutron stars, X-ray pulsars and bursts of X-rays that light up the sky and then disappear forever. For RXTE, the trick to observing these kinds of objects was all in the timing – an ability to observe changes in X-ray brightness that occur in a mere thousandths of a second, or over several years.

How fast and how energetic are these objects? Some pulsars spin faster than a thousand times a second. And a neutron star produces a gravitational pull so powerful that a marshmallow striking the star’s surface would hit with the force of a thousand hydrogen bombs. Astronomers study changes that happen from microseconds to months in cosmic objects to learn about how gravity works near black holes, how pulsars in binary systems are affected by mass transferring from one star to the other, and how the giant engines in distant galaxies are powered.

RXTE was launched into low-Earth orbit on December 30, 1995 and after seven years of operation RXTE completed its mission in 2012, making unique contributions to our understanding of these extreme objects. RXTE re-entered the Earth’s atmosphere on April 30, 2018.
+ Learn more about the RXTE Mission

WISE was an unmanned satellite carrying an infrared-sensitive telescope that will image the entire sky. Since objects around room temperature emit infrared radiation, the WISE telescope and detectors are kept very cold (below -430° F / 15° K, which is only 15° Centigrade above absolute zero) by a cryostat - like an ice chest but filled with solid hydrogen instead of ice.

Solar panels provide WISE with the electricity it needs to operate, and always point toward the Sun. Orbiting several hundred miles above the dividing line between night and day on Earth, the telescope looks out at right angles to the Sun and always point away from Earth. As WISE orbits from the North pole to the equator to the South pole and then back up to the North pole, the telescope sweeps out a circle in the sky. As the Earth moves around the Sun, this circle moves around the sky allowing WISE to observe the whole sky in six months.
+ Learn more about the WISE Mission

The WMAP mission addresses fundamental questions in cosmology: What is the geometry of the Universe? How did structures, such as galaxies and galaxy clusters, that we see in today’s sky come about? How old is the Universe, and what are its constituents?

Answers to these questions lie in the Cosmic Microwave Background (CMB), the remnant background radiation left over from the Big Bang, which is remarkably uniform over the entire sky, at an effective temperature of 2.7 degrees Kelvin. The CMB, smooth as it is, nevertheless contains tiny fluctuations in its temperature, on the level of one part in 100,000. From these fluctuations grew the structures in the Universe that we see today, and with a careful measurement of the properties of these fluctuations, much can be learned about the history and content of the Universe.
+ Learn more about the WMAP Mission