Missions of Opportunity (MO) in Development 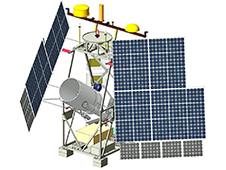 The Galactic/Extragalactic ULDB Spectroscopic Terahertz Observatory (GUSTO) mission, led by Dr. Christopher Walker, principal investigator from the University of Arizona will use an Ultralong-Duration Balloon (ULDB), launched from Antarctica, to carry a telescope with carbon, oxygen and nitrogen emission line detectors. The unique combination of data will provide the spectral and spatial resolution information needed for Dr. Walker and his team to untangle the complexities of the interstellar medium, and map out large sections of the plane of our Milky Way galaxy and the nearby galaxy known as the Large Magellanic Cloud. 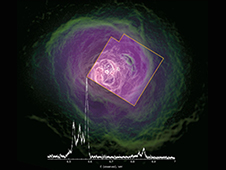 The X-Ray Imaging and Spectroscopy Mission (XRISM) is a JAXA/NASA collaborative mission, with ESA participation set to investigate X-ray celestial objects in the Universe with high-throughput, high-resolution spectroscopy. NASA/GSFC is developing the Resolve soft X-ray spectrometer detector and many of its subsystems together with the X-ray mirror assembly for Resolve and the JAXA Xtend soft X-ray imager. XRISM is scheduled for launch in 2021 on a JAXA H-2A rocket.

Global-scale Observations of the Limb and Disk (GOLD) 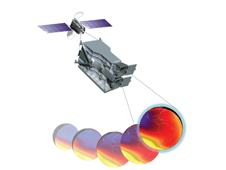 The Global-scale Observations of the Limb and Disk (GOLD) mission of opportunity will perform unprecedented imaging of the Earth's thermosphere and ionosphere from geostationary orbit. GOLD's imager will fly as a hosted payload on a commercial communications satellite provided by SES Government Solutions, one of the world's leading comsat companies. This hosted payload approach is a pathfinder for cost-effective NASA science missions.

GOLD will answer fundamental scientific questions about how the thermosphere-ionosphere (T-I) system responds to geomagnetic storms, solar radiation, and upward propagating tides. GOLD will conduct simultaneous measurements of temperature and composition in the T-I system on a global scale, in the same way that weather satellites provide comprehensive measurements of the troposphere. GOLD's synoptic images of temperature and composition at a half-hour cadence with enable to unambiguous separation of temporal and spatial variability. GOLD's far-ultraviolet imaging spectrograph will perform breakthrough measurements needed to address compelling questions about the global response of the T-I system to external and internal influences and their ties to space weather, comparative planetary atmospheres, and Earth sciences.

GOLD is led by the Principal Investigator, Dr. Richard Eastes of University of Central Florida (UCF). GOLD is a collaboration between UCF, University of Colorado/LASP, SES-GS, NCAR, University of California/Berkeley, NOAA, and others.
+ Learn more about the GOLD Mission 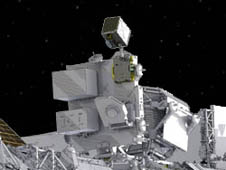 The Neutron star Interior Composition ExploreR (NICER) is a NASA Explorer Mission of Opportunity dedicated to the study of the extraordinary gravitational, electromagnetic, and nuclear-physics environments embodied by neutron stars. NICER is exploring the exotic states of matter inside these stars, where density and pressure are higher than in atomic nuclei, confronting theory with unique observational constraints. NICER is enabling rotation-resolved spectroscopy of the thermal and non-thermal emissions of neutron stars in the soft (0.2-12 keV) X-ray band with unprecedented sensitivity, probing interior structure, the origins of dynamic phenomena, and the mechanisms that underlie the most powerful cosmic particle accelerators known. NICER achieves these goals by deploying an X-ray timing and spectroscopy instrument as an attached payload aboard the International Space Station (ISS). Grazing-incidence optics coupled with silicon drift detectors, actively pointed for a full hemisphere of sky coverage, provide photon-counting spectroscopy and timing registered to GPS time and position, with high throughput and relatively low background.

In addition to advancing a vital multi-wavelength approach to neutron star studies through coordination with radio and γ-ray observations, NICER is providing a rapid-response capability for targeting of transients, continuity in X-ray timing astrophysics investigations post-RXTE through a proposed Guest Observer program, and new discovery space in soft X-ray timing science.
+ Learn more about NICER Mission

INTEGRAL is providing new insight into the most violent and exotic objects of the Universe, such as black holes, neutron stars, active galactic nuclei and supernovae. INTEGRAL is also helping us to understand processes such as the formation of new chemical elements and mysterious gamma-ray bursts, the most energetic phenomena in the Universe. This will be possible thanks to INTEGRAL's combination of fine spectroscopy and imaging of gamma-ray emissions in the energy range of 15 keV to 10 MeV. INTEGRAL also has an optical camera and X-ray detector, energy range 3 to 35 keV, for simultaneous observations across the EM spectrum.

Gamma-rays are even more powerful than the X-rays used in medical examinations. Fortunately, the Earth's atmosphere acts as a shield to protect us from this dangerous cosmic radiation. However, this means that gamma-rays from space can only be detected by satellites. INTEGRAL is the most sensitive gamma-ray observatory ever launched. It can detect radiation from the most violent events far away and from processes that made the universe habitable.

INTEGRAL is a truly international mission with the participation of all member states of ESA plus the United States, Russia, Czech Republic, and Poland. ESA appointed Alenia Spazio, Italy, as industrial prime contractor, responsible for the design, integration and testing of the satellite. On board, four instruments from teams led by scientists in Italy, France, Germany, Denmark, and Spain are today gathering and analyzing the gamma-rays from space. A Russian Proton rocket successfully placed the spacecraft into orbit. ESA and NASA ground stations are keeping in touch with INTEGRAL.
+ Learn more about the INTEGRAL Mission

The Two Wide-angle Imaging Neutral-atom Spectrometers missions, TWINS-A and TWINS-B, provide a new capability for stereoscopically imaging the magnetosphere. By imaging the charge exchange neutral atoms over a broad energy range (~1-100 keV) using two identical instruments on two widely spaced high-altitude, high-inclination spacecraft, TWINS will enable the 3-dimensional visualization and the resolution of large scale structures and dynamics within the magnetosphere for the first time. In contrast to traditional space experiments, which make measurements at only one point in space, imaging experiments provide simultaneous viewing of different regions of the magnetosphere. Stereo imaging, as done by TWINS, takes the next step of producing 3-D images, and will provide a leap ahead in our understanding of the global aspects of the terrestrial magnetosphere.

The TWINS instrumentation is essentially the same as the MENA instrument on the IMAGE mission. This instrumentation consists of a neutral atom imager covering the ~1-100 keV energy range with 4°x4° angular resolution and 1-minute time resolution, and a simple Lyman-alpha imager to monitor the geocorona.

TWINS will provide stereo imaging of the Earth's magnetosphere, the region surrounding the planet controlled by its magnetic field and containing the Van Allen radiation belts and other energetic charged particles. TWINS will enable three-dimensional global visualization of this region, which will lead to greatly enhanced understanding of the connections between different regions of the magnetosphere and their relation to the solar wind.
+ Learn more about the TWINS Mission

Past University-class Explorers (UNEX) and Missions of Opportunity (MO) Missions 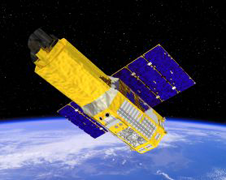 Suzaku, formerly known as NeXT, is Japan's fifth X-ray astronomy mission, and was developed at the Institute of Space and Astronautical Science of Japan Aerospace Exploration Agency (ISAS/JAXA) in collaboration with U.S. (NASA/GSFC, MIT) and Japanese institutions. Suzaku covers the energy range 0.2 - 600 keV with the two instruments, X-ray CCDs (X-ray Imaging Spectrometer; XIS), and the hard X-ray detector (HXD). Suzaku also carries a third instrument, an X-ray micro-calorimeter (X-ray Spectrometer; XRS), but the XRS lost all its cryogen before routine scientific observations could begin.

The U.S. Suzaku Guest Observer Facility (GOF) is located at NASA's Goddard Space Flight Center in Greenbelt, Maryland. The GOF is part of the Office of General Investigator Programs (OGIP) in the Astrophysics Science Division (ASD).

The Coupled Ion-Neutral Dynamics Investigations (CINDI), a mission to understand the dynamics of the Earth's ionosphere. The interaction between electrically neutral and electrically charged gases in the upper atmosphere has a major influence on the structure of the ionosphere.

CINDI will provide two instruments for the Communication/Navigation Outage Forecast System (C/NOFS) satellite. C/NOFS, a United States Air Force (USAF) project, will predict the behavior of equatorial ionospheric irregularities which can cause major problems for communications and navigation systems.

CINDI’s goal is to extend the scope of the C/NOFS program to investigate the physical connections between the ion and neutral gases that lead to and promote the growth of equatorial plasma structure. Understanding these interactions extends far beyond the specific problem of determining when equatorial ionospheric structure will appear and into fundamental understanding of dynamo processes and momentum exchange that are important in all planetary environments where charged and neutral constituents have different mobility.

CINDI will also address two important questions related to ion-neutral interactions and their influence on the generation and evolution of ionospheric structure:

+ Learn more about the CINDI Mission

The Cosmic Hot Interstellar Plasma Spectrometer (CHIPS) is a University-Class Explorer (UNEX) mission funded by NASA. It launched on January 12, 2003 and carryied out all-sky spectroscopy of the diffuse background at wavelengths from 90 to 260 Å with a peak resolution of /150 (about 0.5 eV). CHIPS data will help scientists determine the electron temperature, ionization conditions, and cooling mechanisms of the million-degree plasma believed to fill the local interstellar bubble.

Scientists believe that the million-degree gas in the “local bubble” is generated by supernovae and stellar winds from hot stars, but want to better understand the origins and cooling of this gas, and apply knowledge of these processes to the study of other galaxies beyond our Milky Way.

Diffuse million-degree plasma is ubiquitous in the Universe. Other than the dense gas in coronae and cataclysmic variables, however, no astrophysical plasma has been observed in the extreme ultraviolet band where the majority of the energy is expected to emerge. As a result, there is significant uncertainty as to the mechanisms by which hot interstellar plasma sheds its reservoir of thermal energy. Spectra from CHIPS will help us determine how the million-degree gas in the Local Bubble cools. These results will find important applications in interpreting X-ray observations of spiral galaxies, modeling of the global characteristics of the interstellar medium, and other areas of astrophysics.
+ Learn more about the CHIPS Mission

HETE-2 is using UV, X-ray and gamma ray instruments to study gamma ray bursts (GRBs). HETE-2 can localize bursts with several arcsecond accuracy, in near real-time aboard the spacecraft. The coordinates of GRBs detected by HETE are distributed to interested ground-based observers within seconds of burst detection, thereby allowing detailed observations of the initial phases of GRBs.

The HETE program is an international collaboration led by the Center for Space Research at the Massachussetts Institute of Technology. Our collaborating institutions include the Institute for Chemistry and Physics (RIKEN), the Los Alamos National Laboratory (LANL), the Centre d'Etude Spatiale des Rayonnements (CESR), the University of Chicago, the University of California, Berkeley, the University of California, Santa Cruz, the Centre Nationale d'Etudes Spatiales (CNES), the Ecole Nationale Superieure de l'Aeronautique et de l'Espace (Sup'Aero), the Consiglio Nazionale delle Ricerche (CNR), the Instituto Nacional de Pesquisas Espaciais (INPE), and the Tata Institute of Fundamental Research (TIFR).

The original HETE spacecraft was lost as a result of a launch failure on November 4, 1996.
+ Learn more about the HETE-2 Mission

The Student Nitric Oxide Explorer (SNOE) is a small scientific spacecraft designed, built, and operated by the University of Colorado at Boulder, Laboratory for Atmospheric and Space Physics (LASP).

Its scientific goals are to measure nitric oxide density in the terrestrial lower thermosphere (100-200 km altitude) and analyze the energy inputs to that region from the Sun and magnetosphere that create it and cause its abundance to vary dramatically.

The SNOE spacecraft is a compact hexagonal structure, 36” high and 39” across its widest dimension, that weighs 254 lbs. It was launched by a Pegasus XL into a circular orbit, 580 km altitude, at 97.75 degrees inclination for Sun synchronous precession, on 26 Feb. 1998. It spins at 5 rpm with the spin axis normal to the orbit plane. It carries three instruments: an ultraviolet spectrometer to measure nitric oxide altitude profiles, a two-channel auroral photometer to measure auroral emissions beneath the spacecraft, and a five-channel solar soft X-ray photometer.

SNOE is one of three satellite projects selected for the Student Explorer Demonstration Initiative program (STEDI). STEDI is funded by NASA and managed by the Universities Space Research Association (USRA).
+ Learn more about the SNOE Mission