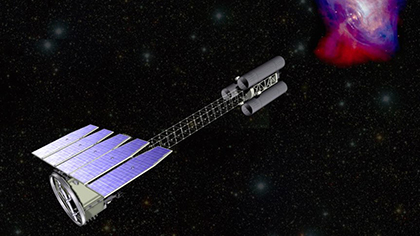 The Imaging X-ray Polarimetry Explorer (IXPE) exploits the polarization state of light from astrophysical sources to provide insight into our understanding of X-ray production in objects such as neutron stars and pulsar wind nebulae, as well as stellar and supermassive black holes. Technical and science objectives include:

+ Learn more about the IXPE Mission

Polarimeter to Unify the Corona and Heliosphere (PUNCH)

The Sun's corona is constantly expanding into space, becoming the hypersonic “solar wind” that fills the void between planets. Disturbances in that wind, caused by events at the Sun's surface, influence Earth directly.

How does the Sun's corona give rise to the hypersonic “solar wind” that fills the void between planets? The principal goal of the Polarimeter to UNify the Corona and Heliosphere (PUNCH) is unite our understanding of these two different parts of the heliosphere. After launch to polar Earth orbit in 2023, this quartet of small satellites will image sunlight scattered off of free electrons in the barely-explored boundary zone between the outer corona and young solar wind. Exploiting polarization properties of the scattering process, PUNCH will reveal the solar wind and space weather events in 3D as they propagate across the solar system.

The two spinning TRACERS spacecraft will fly through the Earth's cusps in 500 km altitude sun-synchronous orbits with separations ranging from 10 to 120s. The identically-instrumented spacecraft carry high-cadence fluxgate and search coil magnetometers, electric field probes, and ion and electron electrostatic analyzers. They will provide the observations needed to determine how spatial and temporal variations in magnetic reconnection at the magnetopause drive cusp dynamics. Well-proven instruments, simple mission operations, proven data analysis techniques, and high-fidelity kinetic simulations ensure the success of the mission during its anticipated one-year lifetime.

Aeronomy of Ice in the Mesosphere (AIM)

Fifty miles above the ground, Earth’s highest clouds form an icy membrane at the edge of the atmosphere. In 2007, NASA launched the Aeronomy of Ice in the Mesosphere (AIM) mission to study these mysterious Polar Mesospheric Clouds (PMC’s) over the course of two years.

The primary goal of the AIM mission is to help scientists understand whether the clouds’ ephemeral nature, and their variation over time, is related to Earth’s changing climate - and to investigate why they form in the first place. By measuring the thermal, chemical and other properties of the environment in which the mysterious clouds form, the AIM mission will provide researchers with a foundation for the study of long-term variations in the mesosphere and its relationship to global climate change. In addition to measuring environmental conditions, the AIM mission will collect data on cloud abundance, how the clouds are distributed, and the size of particles within them.
+ Learn more about the AIM Mission

IBEX is the first mission designed to map the entire region of the boundary of our Solar System. As charged particles from the Sun, called the “solar wind,” flow outward well beyond the orbits of the planets, they collide with the material between the stars, called the “interstellar medium” (ISM). These interactions create energetic neutral atoms (ENAs), particles with no charge that move very quickly. This region emits no light that can be collected by conventional telescopes so, instead, IBEX, measures the particles that happen to be traveling inward from the boundary. IBEX contains two detectors designed to collect and measure ENAs, providing data about the mass, location, direction of origin, and energy of these particles. From this data, maps of the boundary are created. IBEX's sole, focused science objective is to discover the nature of the interactions between the solar wind and the interstellar medium at the edge of our Solar System.

Over the course of a two-year mission, IBEX will answer four fundamental science questions:

+ Learn more about the IBEX Mission

Understanding the interface between the photosphere and corona remains a fundamental challenge in solar and heliospheric science. The Interface Region Imaging Spectrograph (IRIS) mission opens a window of discovery into this crucial region by tracing the flow of energy and plasma through the chromosphere and transition region into the corona using spectrometry and imaging. IRIS is designed to provide significant new information to increase our understanding of energy transport into the corona and solar wind and provide an archetype for all stellar atmospheres. The unique instrument capabilities, coupled with state of the art 3-D modeling, will fill a large gap in our knowledge of this dynamic region of the solar atmosphere. The mission will extend the scientific output of existing heliophysics spacecraft that follow the effects of energy release processes from the sun to Earth.
+ Learn more about the IRIS Mission 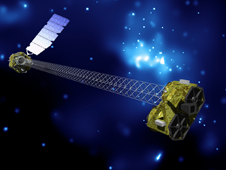 The Nuclear Spectroscopic Telescope Array (NuSTAR) is an Explorer mission that will allow astronomers to study the universe in high energy X-rays. Launching in 2012, NuSTAR will be the first focusing hard X-ray telescope to orbit Earth and is expected to greatly exceed the performance of the largest ground-based observatories that have observed this region of the electromagnetic spectrum. NuSTAR will also complement astrophysics missions that explore the cosmos in other regions of the spectrum.

X-ray telescopes such as Chandra and XMM-Newton have observed the X-ray universe at low X-ray energy levels. By focusing higher energy X-rays, NuSTAR will start to answer several fundamental questions about the Universe including:

+ Learn more about the NuSTAR Mission

Fast Auroral Snapshot Explorer (FAST) is the second of the Small-Class Explorer (SMEX) missions. It will investigate the plasma physics of the auroral phenomena which occur around both poles of the Earth. This will be accomplished by taking high data rate snapshots with electric and magnetic fields sensors, and plasma particle instruments, while traversing through the auroral regions.

The FAST satellite is a highly sophisticated scientific satellite designed to carry out in situ measurements of acceleration physics and related plasma processes associated with the Earth's aurora. Initiated and conceptualized by scientists at the University of California at Berkeley, is designed to carry out small, highly focused, scientific investigations. FAST’s primary objective is to study the microphysics of space plasma and the accelerated particles that cause the aurora.
+ Learn more about the FAST Mission

The mission’s science goals include mapping the history of star formation in the universe and performing ultraviolet all-sky imaging and ultraviolet wide-area spectroscopic surveys.

The GALEX mission is a partnership between NASA’s Jet Propulsion Laboratory and the California Institute of Technology (Caltech) and includes other universities, science institutes, laboratories, and commercial technology providers from around the world. Caltech in Pasadena, California, hosts the GALEX science center and has overall responsibility for the project. JPL in Pasadena, California, constructed the GALEX science instrument, performed calibration, and is responsible for project management.
+ Learn more about the GALEX Mission

Researchers believe that much of the energy released during a flare is used to accelerate, to very high energies, electrons (emitting primarily X-rays) and protons and other ions (emitting primarily gamma rays). The new approach of the HESSI mission is to combine, for the first time, high-resolution imaging in hard X-rays and gamma rays with high-resolution spectroscopy, so that a detailed energy spectrum can be obtained at each point of the image. This new approach will enable researchers to find out where these particles are accelerated and to what energies. Such information will advance understanding of the fundamental high-energy processes at the core of the solar flare problem.

The primary scientific objective of RHESSI is to understand the following processes that take place in the magnetized plasmas of the solar atmosphere during a flare:

+ Learn more about the RHESSI Mission

SAMPEX is the first of NASA’s Small Explorer (SMEX) missions. SAMPEX is designed to study the energy, composition and charge states of four classes of charged particles that originate beyond the Earth: (1) galactic cosmic rays (from supernova explosions in our Galaxy); (2) anomalous cosmic rays (from the interstellar gas surrounding our solar system); (3) solar energetic particles (from explosions in the solar atmosphere); and (4) magnetospheric electrons (particles from the solar wind trapped by the Earth’s magnetic field). SAMPEX observations will provide important new information on the cosmic abundances of elements and their isotopes, the composition of local interstellar gas, the solar composition and the mechanisms responsible for solar atmospheric heating, and electron energy injection into the Earth’s upper atmosphere.
+ Learn more about the SAMPEX Mission

Launched into low Earth orbit in December 1998, the Submillimeter Wave Astronomy Satellite (SWAS) was a two-year NASA mission to enhance understanding of star formation by studying the composition of interstellar clouds and the means by which they collapse.

SWAS studies the chemical composition, energy balance and structure of interstellar clouds and the processes that lead to the formation of stars and planets. It has detected water in almost every dust cloud in space that it has observed, a key indicator in the cooling process that contributes to star formation.

SWAS provided the most precise measurements of water vapor in interstellar clouds and established the tightest limits on the maximum amount of molecular oxygen that might be in these clouds.
+ Learn more about the SWAS Mission

The objective of the Transition Region and Coronal Explorer (TRACE) satellite is to explore the three-dimensional magnetic structures which emerge through the visible surface of the Sun — the Photosphere — and define both the geometry and dynamics of the upper solar atmosphere - the Transition Region and Corona. The magnetic field geometry can be seen in images of solar plasma taken in wavelengths emitted or absorbed by atoms and ions formed in different temperature ranges. The transition from the 6000 degree K Photosphere, where magnetic fields and plasma are in rough equipartition (low beta), to the multi-million degree Corona, where the magnetic fields dominate (high beta), is extremely difficult to model. Many of the physical process that occur here — plasma confinement, reconnection, wave propagation, plasma heating — arise throughout space physics and astrophysics. And to date, no images have ever been collected that show the required temperature range nearly simultaneously with both high spatial and temporal resolution.
+ Learn more about the TRACE Mission